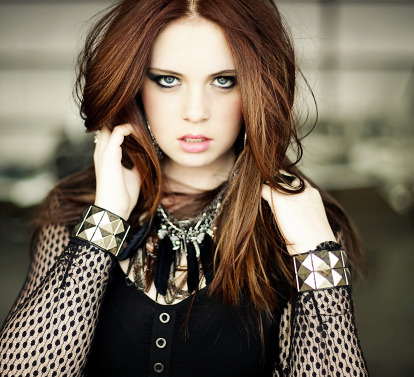 A singer and songwriter, Nicole Krinsky has always had a passion for music. Born in 1994 in New Jersey, Nicole discovered her talent for singing when she performed Lucky by Britney Spears in a summer camp talent show when she was 7. From there, Nicole's talents flourished when at only 8 years old she had finished writing her first original song. The following years led to many other performances in front of friends and family; whoever would hand Nicole a microphone, she was happy to take it. In 2006 Nicole and her family relocated to Georgia. Since the move Nicole has spent a great deal of time refining her writing skills and developing her vocal capabilities. She not only draws from her personal experiences as inspiration for her songs, but Nicole often fuses different genres of music together in her songs, leaving her with a unique blend of sound that is all her own. Along with being a singer-songwriter, Nicole is also a self taught pianist. Through singing, writing and playing piano, Nicole is able to express her passion for music in a triple-threat style that is completely original. A talented musician and performer, this unsigned artist is a ready to go package waiting for her big break. Check out Nicole's website at  www.nicolekrinsky.com.
Back

Nicole was thrilled to sing in front of 70,000 fans. "I wasn't nervous”, she said, "though I've never performed in front of that many people before." She continued "Singing is my passion. There are a lot of tough notes in our national anthem, as everyone knows, but I practiced hard."

To win the contest Nicole had to submit an online entry clip to YouTube. The top 10 finalists were then placed in a fan-based pole, in which Nicole won with 22% of the vote.

You can hear more of Nicole on her website, www.NicoleKrinsky.com. Singing since a young age, she recently recorded and released her first pop single, "Homeboy Hookup", written and produced by Def Jam recording artist Phyzikal. She also just completed her first music video in Los Angeles, California with acclaimed director Matt Alonzo of SkeeTV Productions. The video can be found on her website and on YouTube. For more information on Nicoles' music and appearances please visit her website or call 770-715-7508.

Tickets and More Information
Update Required To play the media you will need to either update your browser to a recent version or update your Flash plugin.
Download Download
Back
You Tube