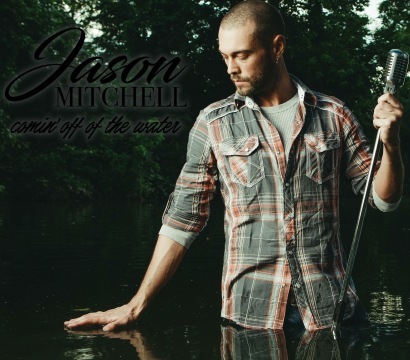 Jason Mitchell is a native Nashvillian singer/songwriter whose tastes in music run from Vintage R&B to Contemporary Country. Raised on Barry White and the Temptations and Moe Bandy and Alabama, he thinks lyrics are still important in a song; they have to speak to him.

He has deep family roots; wife Allison, who will soon become a Nurse Practitioner and 5 year old son Jackson who is the light in his life.

Jason's new EP titled "Comin' Off The Water" is now available for download from iTunes and he has a new duet with Cowboy Troy being released this summer called "Party Up" that he co-wrote!

Jason is passionate about getting back to work, on the road, singing his songs to his fans. He’s missed it. He’s ready.

Funny how sometimes the things a person most fiercely resists later become the very things they embrace most completely. That's certainly the case with Jason Mitchell, a dynamic young country singer whose music business childhood left him convinced he wanted nothing to do with being a performer.

"I was born in Nashville and grew up a total studio rat," Jason explains. "My dad, Dan Mitchell, is a producer and songwriter ("If You're Gonna Play In Texas (You Gotta Have A Fiddle In The Band") and mom, Cathy, made stage clothes for a bunch of stars."

He received a degree in Musicology 101 at an early age watching and learning from the likes of music legends Tiny Tim, Johnny PayCheck, Big Al Downing, Moe Bandy and business veteran Dale Morris.

Jason moved to Ohio in grade school and developed an interest in soccer, martial arts and just about anything besides making music. "I loved music, but I wanted to listen to it, and that's it," he says. Two events in a two-year period changed his course forever. Days short of his 18th birthday, Jason was in an accident and caught fire from his waist to his head. "I had first and second degree burns to my face and spent 10 hours in ICU," he says. "I remember leaving the hospital later and driving across a bridge. I saw a big church and just started praying for healing and promising to give it back to God."

He did heal, in half the time the doctors predicted, and went on to college. While attending classes he learned that his father had suffered a massive heart attack. "We talked after he was in the clear and he asked me what I was going to do with the rest of my life," Jason recalls. "And I had no idea. He said he'd almost died once, and I had, too. And then he said I might want to start figuring it out so I don't spend my life wandering."

At the time the elder Mitchell was directing the entertainment at a local tourist attraction. "A couple months later I was sitting in economics class and got a text from him that said, 'Heading to auditions, see you later,'" Jason says. He looked up from his phone to see students around him who he didn’t know and the teacher whose English he could barely understand and made a decision. "I picked up my books, walked out of the class, went to the audition and made the cast," he says. "Dad was like, 'I had no idea you sang.' I was there for the next four years. We performed six shows a day and a musical show at night totaling about 1,300 shows a season. Talk about a great learning environment!"

At Dale Morris’ suggestion, Jason put a band together and played hundreds of shows; averaging 150 to 200 shows a year across the country, the Bahamas and Caymans and put over 250,000 miles on “Queen Mary” his Silverado pickup truck! And as promised, he’s giving back. Jason has worked with the Vanderbilt Burn Center and Camp Hope and his Jason Mitchell Foundation helped raise money for many other charities including the Mississippi Burn Foundation.

His single “STOMP” became one of the Pittsburg Steelers featured songs at home games during the 2013 season and they invited Jason to sing the song and the National Anthem at Heinz Field, in front of 70,000 fans! That’s something he will never forget! And "Stomp" played consistently on the Highway and charting on the Mediabase, New and Active and Music Row Charts.

Now with a new CD, A new single and a new tour is scheduled for 2017, Jason is excited to hit the road again. "I’ve seen so many artists my dad worked with squander their opportunity," he says. "I'm not comfortable going to sleep at night thinking there's somebody out there working harder than I am."

Jason in the Studio at work on New EP!!

Don't miss all the new press releases on the PHOTO page! Lots of interesting informantion!

Can't say much right now but we'll be performing 30-days in 7-months in the Southeast!

Excited to get back on the road!

“Little Pink Bug” is a rocking testament to what a man with a broke down truck will endure for a night of love, when his baby picks him up in her pink VW Bug and drives him through the ‘down home Georgia mud’ to party with his boys.

Jason will be performing in this 3 day songwriter's event on Flint River in Thomasston, GA. He will also be giving a seminar on Social Media through Nocturnal Music Group.

Check it all out at soyouwrite.com and plan on joining the festivities!

Jason debuted his new band at TnT Tuesday night at the So You Write writer's night. So You Write writers included; Sean Gasaway, Kata Hay and Dan Mitchell. Also performing the Rodeo Gypsy Band. Jason closed out the night with several songs from his upcoming CD.

Jason Mitchell will be appearing for the 6th consecutive year at the Valley Mall in Hagerstown, MD for the Annual Parent Child Center Telethon on NBC TV.
One of Mitchell’s many ‘causes’ he says “I’m always excited to be a part of this important Telethon. It just keeps getting better and better. I'm ready for next year!”
The event is April 20th 2014.

Have been invited to sing the "Steeler Stomp" and the "National Anthem at the Pittsburgh Steeler game at Heinz Stadium.

Come out and do the STOMP with me and Sean Gasaway!

Check out all info on Facebook. Jason will be there with Sean Gasaway for this most worthy cause!!

Jason will be performing the National Anthem at the Mississippi  Braves Baseball Game June 10th accompanied by Sean Gasaway. Come out and cheer them on!

Jason will be performing his new single "Stomp" and other songs June 11 for the Mississippi Burn Foundation Benefit at the Hard Rock Cafe in Jackson MS. Come out... it's a worthy cause/

"Stomp" a message from Jason

I just wanted to thank some folks for making Stomp a reality.

recorded at: The Tracking Room

I sincerely thank Stance Bingham at K99fm in Biloxi for the hospitality and the great interview!

Also thanks to George Cumbest for kickin' the "STOMP THE SWAMP" tour off at the Mancave, and Robert Dienelt for all the hard work on "STOMP" I don't know how to repay your kindness guys ... but I will!!

And a huge THANK YOU to my street team and all my fans who haven't given up on me!!!

My new iphone app is available on iTunes!!

Keep up to date right on your smartphone!

George Cumbest (President of the Mississippi Songwriter Festival" hosted the first "Stomp Party" of the year at The Mancave Saturday night for Jason. Special guests included Mark Sherrill who wrote "Ol Red" for Blake Shelton, Sean Gasaway, co-writer of "Stomp" and Dan Mitchell, co-writer "Stomp" and "If You're Gonna Play In Texas, You Gotta Have A Fiddle In The Band"

Jason was in Biloxi kicking off his 'Stomp The Swamp' tour with an interview with Stance Bingham at K99fm. Below is a post on Stance's Blog on the K99 website. Check the photo section for a pic of the event!

Jason Mitchell came by the studio today. We will have him on the Sunday night show "Homegrown Country" it starts at 9pm. We are the first station to play his song "Stomp" and had a great response to it. Sunday Night we will visit with Jason and play his song for you again. In the picture with us is Jasons Dad Dan who wrote "If You're Gonna Play in Texas" for Alabama. So Jason grew up in the studio and on the road doing country. He is a great talent and we are happy to share him with you on K99 Country. We'll let you know when you can get his CD or download him on the net.

Hey Everybody,
Just filling you in on what I've been up to.
I miss all my fans out on the road but wanted you to know I'm coming back!

I've spent the last several months writing and recording some great new material for my next project.

We just shot the instructional video for my next single "STOMP." We're still getting some things lined up but we'll be posting the song and the dance soon.

I'm ready to come visit, so kick off your heels and pumps and get ready for the STOMP TOUR!!!

Jason Mitchell will be appearing for the 5th consecutive year at the Valley Mall in Hagerstown, MD for the Annual Parent Child Center Telethon on NBC TV.

One of Mitchell’s many ‘causes’ he says “I’m always excited to be a part of this important Telethon. I’ve made so many fans and friends through the years in Hagerstown that it’s a lot like going home.”

» Crib Note: Congratulations to Morris Artist Management's Jason Mitchell and wife Allison on the recent birth of their son Jackson Danny, who arrived safely on March 5. All are said to be doing well.