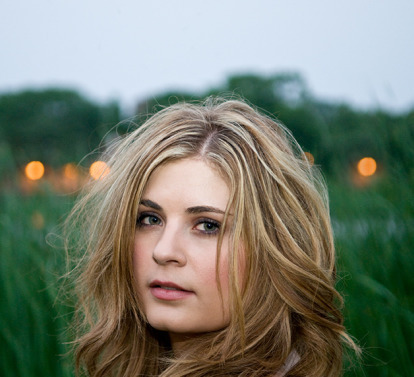 If Brynn Andre’s debut record  Snowboots  (Words On Music, 2007) followed the teenage singer-songwriter’s passage from her North Dakota past, then her new self-titled follow-up album documents the upheaval she faced in Minneapolis after reluctantly unmasking what had become her present-day fiction.

Produced by Nashville wunderkind  Neilson Hubbard  (Kate York, Matthew Perryman Jones), the record’s ten songs find Andre forging her own pathway to an unknown but boundless future with a compass carved from the agonizing dissolution of a long-term relationship.

In between records, Andre found her life becoming smaller and smaller, taking an identity (and songwriting) moratorium whilst becoming a corporate cube-dweller. In this emotionally detached foxhole, she bided her time whilst waiting to take on the role of the idyllic Midwestern wife she thought she wished to play.

But Brynn’s protagonist was not yet casting, nor being altogether forthright, and echoes of this unrealized life seep into songs like Ravine, in which Andre asks:

Isn't that the point, aren't you the one / Who's supposed to pull out the rug /

And tell me baby, all of our waiting  / It's finally done

In time Andre stopped waiting, and by ending the relationship and razing her as-prescribed life she jump-started her songwriting with an untapped rawness and ferocity, composing words and music that had been submerged for years in her half-contented illusory relationship.

With heartbreak as the match for her new songwriting spree, her trusted piano was the matchbox that gave it form and function, creating dimly lit ballads such the sparse, 3/4 metered Devil and the impossibly hook-laden Homecoming King.

But sometimes the fire lights up a room, and it’s then you can trace the jagged outline of Andre’s not yet fully mended heart. Using a buoyant tempo as a sleight of hand, Andre levies her indictment in Crime:

While you make a great case, I found your fingerprints on every single exit sign

Which is to say, Andre occasionally takes a look back, such as on Fire Escape, in which she coos over a bluesy soundscape that might emanate from the Roadhouse in Twin Peaks:

I've tried to love the echo / Of my empty place /

Now unfettered, Andre has taken first steps down her new path, revealed first as an over the shoulder threat in My Best:

And tonight, tonight / I'm gonna give someone my best

And then as an explicit confessional in the torrid Shot Glass:

Fill it up with good stuff baby / Take it down fast /

Fill me up with good stuff baby / We're going down fast

As verdant life returns stronger and more plentiful after being decimated from volcanic ash, Brynn Andre is a record borne from destruction, but richly populated with melodies and lyrics with long half lives and deep roots.

Brynn was selected by Metro Magazine as a Local Musician to Watch.

Natalie Gallagher recently wrote a lovely article about Brynn and her upcoming record on GimmeNoise.

Brynn Andre is not at as sweet as she looks.

From first glance, the 26-year-old blonde looks every inch like your everyday Minnesota-nice girl, but as we sit chatting at the Aster Café (where I also work) about Andre's new album and future projects, it becomes clear that Andre is far from sugary. As she discusses her sound and her songwriting, Andre speaks confidently--almost defiantly--and her warm eyes crackle with a barely contained fire.

Andre is sort of new on the Twin Cities music scene. Sort of, because this is her second full-length album; her first, Snowboots, came out in 2007.

"Looking back, my first album was too forced," Andre said of her earlier efforts. "I was trying too hard. You could hear the desperation as I tried to be an indie singer-songwriter." Andre's smile is wry. I ask her about the new sound she has cultivated on her second album, which she just finished recording in Tennessee.

"I've been really fearless since last year," Andre says proudly. "I just got balls. I mean, I had this really bad break-up, and I was like, 'Well, I've been through some of the worst things a person could go through'...and then all these songs started coming."

It was not quite a year ago that Andre took her broken heart and tended to it the way artists typically do--by drinking too much and writing sad songs about it.

"He was the love of my life, but it fell apart," Andre said with a shrug, apparently well recovered at this point. "And if you want to get existential or spiritual about it, it needed to happen so that this new record could happen. And this is the therapy--singing your heart out."

Andre has her Yamaha keyboard propped up on stage on a couple of barstools, and I ask her to play a couple of songs. It's a busy morning at the Aster, and the stage is not set up for live music, but what's a little impromptu performance, anyway? Andre is fearless, and she belts out some Sara Bareilles-style ballads without a microphone, starting with the accusatory "Crime," then new song "Fire Escape," which Andre explained was "a lullaby for myself...mostly about being mad at myself for wanting someone."

Andre's voice is solid, with stylings akin to Missy Higgins and Vanessa Carlton, but her greatest strength is in the songwriting. Andre knows who she's singing to and nails the target head-on, and while her confessional pop sound is far from feel-good and sugary, her lyrics line up nicely with a well-executed percussive piano melody.

Andre's songs are all heart-on-my-sleeve, and her voice is tuned perfectly for dynamic keying. I ask her how she feels about the Sara Bareilles comparisons, because that brand of pop is definitely the genre she is working in.

"You listen to other types of singers and you get self-conscious," Andre said, and that same crooked smile was back. "I've spent a lot of time apologizing for the fact that I'm a confessional female singer-songwriter, but I'm done with that. I'm not going to apologize for being authentic. "

Besides, insists Andre, she's not in this for the masses. "You can't be everything to everyone," she said as she looked across the restaurant at the smattering of tables enjoying their lunch. "I'm just going to write to this one girl who I watch Sex and the City with and we eat ice cream together and cry about boys, and we're going to jam out together. That's who my girl is."

Andre's new as-yet-untitled album will be out this summer. You can listen to tracks from her 2007 album Snowboots here. Andre will be playing a fundraiser show for Kids Against Hunger with the Lisa Keith Band tonight, Wednesday, February 2, at the Aster Café.