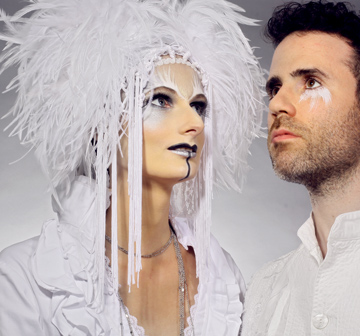 You awoke.
You were there, among the luminous beings. You did not know how you had arrived, or what language they were speaking, but you understood they meant no harm and they wished to sing you a story.
It was important.
Their words, somehow familiar, shimmered on the verge of meaning. And as their iridescent music enfolded you, you knew they longed for you to understand.
Then it was over, and you awoke, and you were back.
This is what you remember.
------
Akara plays mystical dancefloor symphonies. Channeled-language light-being vocals with a classical orchestra and hyperdimensional psychedelic production. Steve Reich meets Shpongle meets Indian classical music and dubstep. Filigreed and beautiful and immersive, there is nothing like Akara.
Akara is the brainchild of Joshua Penman, a conservatory-trained classical composer turned electronica producer. He was working on orchestra music and chamber music and opera, and meanwhile going to Burning Man and underground psytrance parties. As Joshua's success in the classical music world grew - his shamanic-journey orchestra piece "Songs the Plants Taught Us" has been performed by over fifteen orchestras - he began more and more to mix the psychedelic sounds he fell in love with at parties with the deep expressiveness and structure of the music of his training and upbringing.
Akara is the fruition of a twelve-year process of experimentation and development. Fed by an enormous number of musical streams - from the twelfth-century polyphony of Perotin to the hyper-current West Coast bass-music scene, Akara's influences include Shpongle, Claude Vivier, Indian classical music, The Glitch Mob, Steve Reich, Maurice Ravel, an-ten-nae, Beats Antique, Frou Frou, Irish traditional music, old-school jungle, Phillip Glass, Air, Tuvvan Throat Singing, Judd Greenstein, Logic Bomb, Bluetech, Orbital, Peruvian Icaros, and Amma Bhajans.
Akara features the otherworldly vocals of Femke Weidema, a highly trained musician and accomplished songwriter in her own right, leaving her country/pop/Latin roots to be reimagined and recreated as extradimensional psychedelic goddess...
Live, Akara exists in two formats: as a duo, and as a larger group. As a larger, nine-member group, Femke and Joshua are joined by classical musicians to deliver a level of virtuosic performance unusual in the electronica world. As Akara tours, they will also start using an onstage lightshow controlled by software written by Joshua especially for this project, as well as original video and dance/ritual performance.

all composition, keyboards, production, and mixing by Joshua Penman

all recorded by Joshua Penman except harp by Jason Schimmel

Digital painting by Andrew Jones based on a photograph by Sequoia Emmanuelle with makeup by Ashely Joy Beck. Akara logo by Xavi. Layout and design by Joshua Penman.--
Back

Update Required To play the media you will need to either update your browser to a recent version or update your Flash plugin.
Download Download